My work has been to develop algorithms and proteins that are foundational to de-novo protein design. These algorithms have allowed me to collaborate with numerous people. Below is a compilation of the projects I have contributed to while in the Baker lab. These projects also serve as building blocks for modular proteins. More detailed project descriptions are below the images 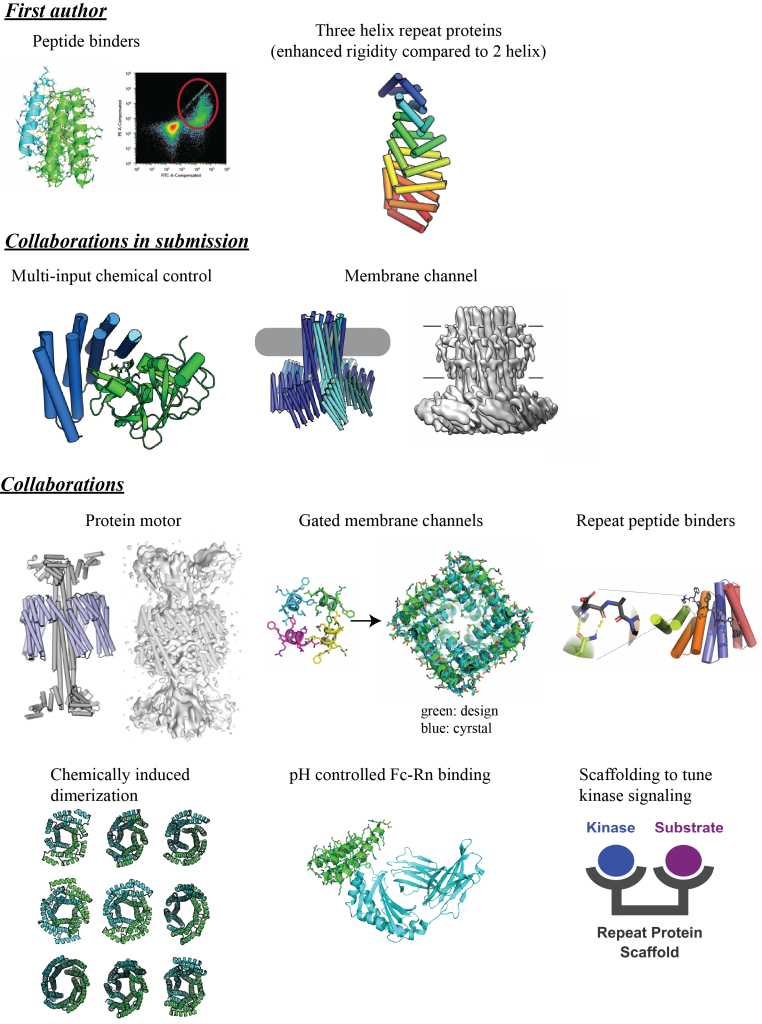 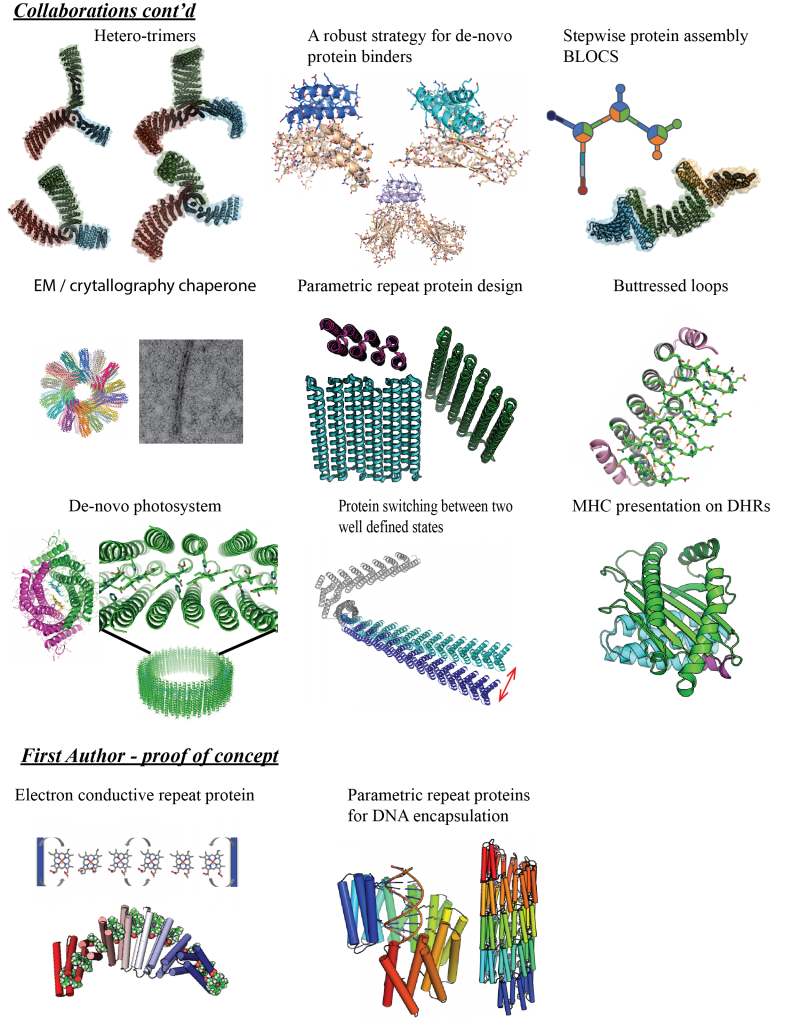 Abstract: We have developed a massively parallel protocol for designing peptide binders. We start by docking the peptide onto a curated scaffold library generated from chopped up repeat protein junctions that range from 80-121aa. Once docked, we optimize (redesign) the interface to maximize affinity and selectivity. During which, we also make sure not to leave any charge groups buried, and make sure there is a strong hydrogen bonding network between the scaffold and the peptide. We are targeting several different peptides ranging from Amyloid beta (important for alzheimer’s disease) to GnRH (gonadotropin releasing hormone), from GIP (glucose induced insulinotropic peptide) to PTH (parathyroid hormone), not only to test our method but also cover a wide range of diseases. We currently have had success with GIP and generated several de-novo protein binders.

Contribution: A new algorithm to slice large proteins into stable mini proteins. A filter to identify which proteins will display on yeast. A Rosetta design protocol that minimizes the number of unsatisfied hydrogen bonds on the peptide. Analysis of protease stability and yeast display data on thousands of designs to improve the methods.

Abstract: The 2-helix repeat geometry has been incredibly useful in material design but the repeated units can be flexible. For improved rigidity 3-helix repeats have been designed. We currently have 4 Small-angle X-ray scattering (SAXs) verified 3-helix repeat proteins.

Contribution: I developed a repeat sampling strategy that is 100x faster than the one used in the 2015 Nature paper and made additional improvements to the sequence design protocol.

Status: To be published in Nature Biotechnology

Abstract: Existing chemical and optogenetic methods for post-translationally controlling intracellular protein function have provided valuable insight into natural biological processes and facilitated the engineering of synthetic cellular functions but are mainly limited to single-input/single-output, digital control schemes. Here, we expand the diversity of post-translational control behaviors that can be obtained by creating a new system consisting of a single protein receiver of multiple drug inputs that is translated by computationally-designed reader proteins. We show that this unique single receiver protein architecture allows diverse behaviors to be obtained, including graded and proportional, dual-output control of transcription and mammalian cell signaling. Notably, we demonstrate that graded control of cell morphology can be achieved by proportionally titrating the competing activities of the GTPases Rac and Rho. The integrated nature of our system provides researchers with unique capabilities for post-translationally controlling mammalian cellular processes and engineering cell therapies.

Contribution: Design of the repeat proteins

Status: In review at Nature

Abstract: The ability to custom design structurally well-defined transmembrane channels would have broad applications in areas ranging from nanopore sequencing to small molecule filtration and sensing, but remains an outstanding challenge. Here, we report the computational design of protein pores formed by two concentric rings of ɑ-helices that are stable and mono-disperse in both water-soluble and membrane protein forms.

Contribution: My algorithm to fuse helices and repeat proteins.

Abstract: We are designing self-assembling protein nanomachines. The first step of this project is to build protein rotor complexes, in which multiple symmetric energy minima along an interface between two components, an axle and a ring, allows brownian diffusive rotation along their symmetry axis. The second step of the project focuses on the design of a Brownian ratchet mechanism effectively converting chemical energy into work.

Contribution: My algorithms for loop closure, structure profile, and helix fusing. In addition the repeat proteins I have designed.

Abstract: De-novo design of selective ion channels will not only overcome a major challenge in protein design, but it will also provide important clues into mechanisms for ion selectivity. Starting from 4 short peptides known to bind a specific ion we built a de-novo protein. We have a crystal structure of this design and Peilong is putting it into a membrane.

Contribution: I worked with Peilong to adapt my de-novo design algorithm from repeat proteins to design of a channel.

Abstract: In nature, peptide-protein interactions play critical roles in modulating the signaling transduction pathway. For example, the interaction between the proline-rich peptide and the SH3 domain is key for propagating downstream T-cell receptor signaling. By using repeat units for peptide-protein interacting units, the sequence and affinity of the binding site is tunable. To test binding of the designs we use yeast-surface display with a wide variety of peptide sequences expressed on yeast. Several designs are seen to bind the appropriate peptides.

Contribution: I worked with Hua and Kejia to design new repeat proteins where curvature is tuned to bind repeat peptides.

Abstract: Chemically induced dimerization (CID), in which two proteins bind to one another only in the presence of a chemical dimerizer, has been an invaluable tool for manipulating cellular signaling. We aim to develop a de novo proteins capable of chemically induced dimerization for biomaterial applications. We are using dimeric helical bundles with a central pore capable of dimerizing only in the presence of a small molecule. The first step was to build a large library of C2 dimeric repeat proteins with a central pore. The next step is to get those dimers to only assemble in the presence of a small molecule.

Contribution: I worked with Derrick to lay out an algorithm to control the curvature of repeat proteins.

Abstract: Neonatal Fc(Fc-RN) receptor extends the half-life of immunoglobulin G antibodies by allowing the protein to avoid lysosomal degradation. IgG binds the Fc-Rn receptor at acidic conditions in the lysosome and is recycled and released to the cell surface when exposed to neutral pH. Amir currently has mini-repeat protein binders to the Fc-Rn receptor and we are optimizing expression and pH control.

Contribution: I worked with Amir as he developed the binding protocol. We used stable mini protein sliced from the repeat protein junctions.

Abstract: In cell signaling pathways, scaffold proteins coordinate the assembly of multi-protein complexes that co-localize kinases and their substrates. To understand the relationship between structure and function in these systems, we have engineered a series of designed protein scaffolds that physically tether a kinase to its substrate with tunable control over the distance between the reacting proteins. In a simple model scaffold with flexibility, we observe significant rate enhancements that depend on scaffold structure. Surprisingly, however, the kinetic data strongly suggest that the intended target structure with 1:1:1 stoichiometry between scaffold, kinase, and substrate is unreactive; instead, a higher-order multi-protein assembly is likely to be the reactive species. This result has important implications for designing scaffold proteins in synthetic biology and for understanding the functions of natural scaffold proteins.

Contribution: I worked with Betsy on the design of the repeat protein scaffold.

Abstract: We are interested in designing specific self-assembling ABC heterotrimeric proteins which can be used as building blocks for higher order design and/or potentially act as logic gates. The proteins have been designed and shown to work by native mass spec.

Contribution: I helped Sherry apply my loop closure and sequence profile algorithms to design the heterotrimers.

Abstract: Making mini-proteins that bind to specific natural targets has proven to be a very challenging task. Success rates of 0 / 15,000 are not unheard of. Longxing and Brian have been working hard to make binders and finally started to achieve success on multiple targets.

Contribution: My structure profile algorithm is the third strongest predictor of a protease stability a key quality of good scaffolds. The first and second predictors are Rosetta score per residue and buried hydrophobicity.

Authors: Chad Miller*, (other authors), TJ Brunette, David Baker
Status: Computational + Experimental
Abstract: Assembly of protein biomaterials in a stepwise fashion would allow us to build complicated hetero-oligomers for a wide variety of tasks including enzyme cascades and immune synapse mimics. This project takes the first steps toward learning the principles of step-wise assembly by combining the hetero-dimer and trimer projects with the repeat junctions.
My contribution: I have mentored Chad and showed him how to computationally connect the hetero-dimers, trimers and repeat protein building blocs.

My contribution: My helix-fusion algorithm and repeat protein junctions were used to attach and orient the target protein.

Abstract: We are building new building blocks (repeat proteins and heterodimers) that are ideal for stitching together to make disc like assemblies. We will use these repeat proteins for multi-component finite 2D scaffolding hubs and membrane scaffolding nanodiscs.

Contribution: I have mentored Tim through algorithm development and project layout.

Contribution: I mentored Hanlun to lay out the underlying algorithm which Hanlun implemented. I also helped Hanlun to design new repeat proteins with curvature similar to ankyrin.

Contribution: I am helping Nate build the large exitonically coupled chlorophyll binder using a combination of my repeat protein design tools. In addition my repeat junctions were used to bind two chlorophylls.

Abstract: To enable de novo design of artificial motor proteins we need to develop proteins that can cycle between two or more well-defined conformations. In this project we are constructing a “helical hinge” that can switch between states.

Abstract: T-cell signaling and activation involves a complex set of cell-surface receptors whose interactions are not fully understood. The first focus on this project is designing a version of the MHC complex that is fused to existing helical repeat proteins. These helical repeats will serve as a rigid attachment point for antigen presentation on designed protein scaffolds.

Abstract: We are attempting to design proteins capable of long range electron transfer for biosensors and redox chemistry. We seek to mimic the electron transfer in the nano-wires found in the Geobacter bacteria but with the additional control. The first step was to build a repeat protein that precisely positions heme so as to be conductive. We have designed proteins that binds multiple heme but the hemes are not oriented appropriately for electron conduction.

Contribution: A new algorithm to build repeat proteins while maintaining ligand in each repeat.

Abstract: We have designed repeat proteins that perfectly encapsulates DNA using arginine to interact with the DNA backbone. This work shows I can now design repeats with arbitrary geometries. This protein has been paused due to Carl leaving lab to launch a de-novo protein design start up.

Contribution: A new algorithm to build repeats with arbitrary geometry.